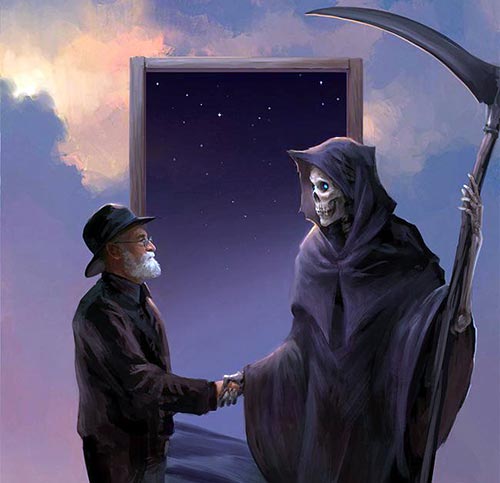 Is death the ultimate Zoom-Out? The one that puts EVERYTHING into perspective?

I don’t mean in a physical or literal sense although if there turns out to be an afterlife then maybe in that way too. No I mean of course in contemplation of death or experiencing the death of another person, especially a loved one.

The writing of this is very timely for me personally as it is the 3rd anniversary of the death of my brother David, 14 Aug 2013. Quite often we avoid the D word, myself included. We may refer to the ‘passing’ or that the person ‘passed away’. Not today and in this writing.

Zhuang Zhou, often known as Zhuangzi (“Master Zhuang”), was an influential Chinese philosopher who lived around the 4th century BC.

“Zhuangzi’s wife died and Huizi went to console him. He found Zhuangzi squatting on the floor with his legs open, drumming on a pot and singing. Huizi said, “You lived with her, raised children with her, grew old together. To not cry at her death is bad enough, but drumming on a pot and singing – what could you be thinking?” Zhuangzi said: “Oh, it’s not like that. When she first died, how could I not grieve? But then I looked back to her beginning, before her birth. Not just before her birth but before she had a body. Not just before she had a body, but before she had qi. In the midst of that amorphous chaos there was a change, and she had qi; the qi changed and she had a body; her body changed and she was born. Now there is yet another change, and she has died. This is like the change of the four seasons: spring, autumn, winter, summer. Now she is residing in the greatest of chambers. If I were to follow here sobbing and wailing, it would show I understood nothing about our destiny. So I stopped.” – The Path, 2016 (Puett & Gross-Loh)

Every time I read this or quote it I am brought to tears. Now I am not a religious or an extremely spiritual person, although the latter is expanding as I grow in years. But even viewed in its most starkest of terms, it Zooms-Out to show that in the scheme of the universe, people are born, by freak chance, live for some arbitrary length of time and then die. This is the way of things. The Zhuongzi (and contemporaries such as Confucius) this is literally “The Way”.  (The Tao (‘dao’) as interpretation of the way of things or the way of the cosmos is referred to as “The Way”). The amazing thing is that we were born and lived in the first place. When we lose a loved one, and this may be a cliche, we should focus on the privilege of having known them at all. We need to Zoom-Out from the negative aspects as much as possible and our own ‘personal loss’ and focus on the positive meaning in having known the person and shared a part of their life.

“The story of life is quicker
Than the wink of an eye
The story of love is hello and goodbye
Until we meet again.” – Jimi Hendrix, 1970

My brother David was an outstanding person. He profoundly affected many people’s lives. Not always in a positive way I must add but he was remarkable and he had an innate ability to bring joy to people with his antics and creative expression and take them out of their mundane view of existence. A close friend of his after his death described him as their Willy Wonka when they were growing up.  That made me laugh so much as it rings so true. At his funeral, there were so many people, some of whom had only known him for a few months, people who had served him in a shop for example.

David became ill suddenly and was unconscious in intensive care for several days before I was asked for permission to turn off the life support. The pain was almost unbearable and the grieving was profound. I should say at this point that prior to losing my brother, I had lost my sister, my dad, my mum, two best friends, and various close relatives. So death was no stranger. Losing Dave was particularly poignant as he was the last of my immediate family. I grew up in a family of five and now there was just me. Walking down the aisle behind the coffin alone I heard someone whisper – “My god, he’s all alone”.

At this time, I had already been developing and applying the Zoom-Out concept and learning from so many people both alive and dead, about how we can reappraise events and our emotions, find positive meaning and get the most from this short life. I know for certain that without these ‘life skills’, my grieving would have gone on for longer and the ongoing suffering and emotional pain would have been far greater to this day and beyond. Note something really important here. By Zooming-Out, not only have I reduced my own personal suffering, I have made mental and emotional space for appreciating David’s life and focusing on turning all that potential for negativity into strength and positive contribution to the world. Instead of being a dark cloud and weight around my neck,  David’s life is a shining light and a source of inspiration. I also take personal solace in knowing that this would be what David wants and not least my mum and dad who brought us both into the world and invested so much love and support into us.

I hope you do excuse me for revealing so much of my own personal story here but I hope you can see that despite the darkest of times, we can help ourselves and others to shine as much light as possible into our lives – we have more power in our hands, or rather our minds, than we often realise. This is why I am so passionate about the Zoom-Out concept and cause. Every time I get feedback from someone that it has helped them reduce the stress or anxiety in their lives then that is worth so much.

Back to Zhuangzi, he is not saying death is something to look forward to or hurry along, quite the opposite, life is to be lived to the fullest.

“Indeed, if we think of death purely from a human perspective, it is profoundly terrifying: it is annihilation of that part of us, or a loved one, that is human. But when we view death from the broadest possible perspective, we feel grief but also see, as Zhuangzi did, that our human form is a wonderful but temporary moment along the transformations that make up the Way. We understand that this person has always been part of the Way and is still part of the Way.That person will become part of the grass, part of the trees, a bird soaring in the sky. If we understand that the stuff that is us has always been a part of the flux and transformation of the cosmos and always will be, then we no longer need to fear death; we become free to fully embrace life. ”  – The Path, 2016 (Puett & Gross-Loh)

If not the ultimate Zoom-Out, then it must be close. If we can Zoom-Out on death, both of our own ultimate death, and the death of the ones we love, then just imagine what else we can Zoom-Out on? As I have mentioned before, the more we practice Zooming-Out, the better we get at it and the more fulfilled and happy life we can lead – and also bringing more happiness and fulfillment to those around us and the World at large.

“It is not that the Way broadens humans, it is that humans broaden the Way” – Confucius, the Anelects

* I cannot recommend this book enough. It lives up to the title!