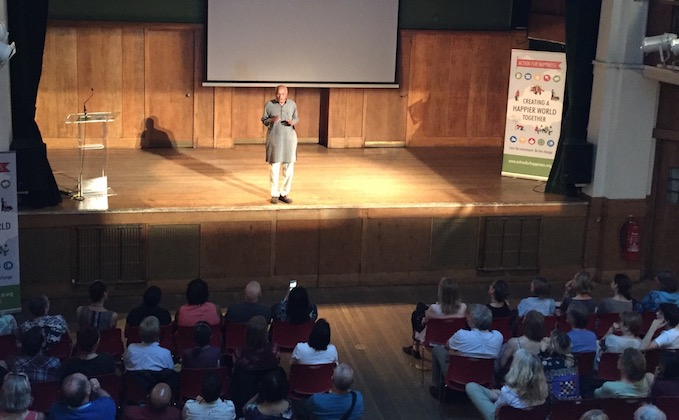 Do you have a formula for happiness?

Last night someone suggested one to myself and around 500 other people.

The suggestion came from a wise 82-year-old man.

So you sit up and listen.

So you sit up even more and listen.

The occasion is an Action for Happiness event in London (19 April 2018) and the man is Satish Kumar and he’s an Indian activist and editor. He has been a Jain monk, nuclear disarmament advocate, pacifist, co-founder of the Schumacher College and is the current editor of Resurgence & Ecologist magazine. And we’ve just watched an award-winning film featuring him entitled “A Quest for Meaning”.

So you definitely sit up and listen.

After watching the film Satish took questions from the audience. His formula for happiness is:

“Trust the future” – not always easy. Anxiety is often associated with thinking of the future. And anxiety in society is on the rise, especially among younger people.

Satish described what is needed to cultivate trust and that is courage.

Satish gave an example which is an example of an Odds Zoom-Out and a Univeral Zoom-Out.

The more courageous perspective is this:

“I prefer not to be cheated but would prefer to be cheated once in a while rather than never trust anyone at all.” – Satish Kumar

>> an Odds Zoom-Out; and a Time Zoom-Out

In other words, do not focus on a single ‘bad instance’ and an imaged one at that. Focus on the big picture over time. Of all the opportunities to trust someone, only a small number are likely (odds) to lead to something bad. Obviously, wisdom should be employed. Don’t trust a crook for example.

“There is no guarantee that I will never be cheated.” – Satish Kumar

>> a Universal Zoom-Out (no law of the universe).

So to sum up and elaborate on Satish’s formula:

Wishing you much happiness and success!