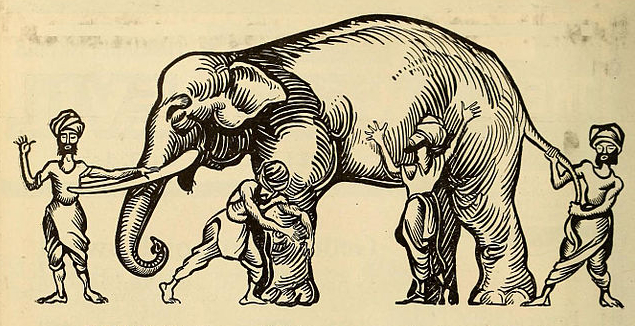 This ancient parable of the blind men and an elephant is pure Zoom-Out.  There have been subtle variations of the parable over the ages. Its roots can be traced back the ancient Indian subcontinent and Buddhism.

It is a story of a group of blind men, who have never come across an elephant before. Each blind man feels a different part of the elephant body, but only one part, such as the side or the tusk. They then describe the elephant based on their partial experience and their descriptions are in complete disagreement on what an elephant is. In some versions they come to suspect that the other person is dishonest and they come to blows.

The moral of the parable is that humans have a tendency to project their partial experiences as the whole truth, ignore other people’s partial experiences, and one should consider that one may be partially right and may have partial information.

The parable is quoted below in the form of an elegant poem by John Godfrey Saxe.

It was six men of Indostan, to learning much inclined,
who went to see the elephant (Though all of them were blind),
that each by observation, might satisfy his mind.

The first approached the elephant, and, happening to fall,
against his broad and sturdy side, at once began to bawl:
“God bless me! but the elephant, is nothing but a wall!”

The second feeling of the tusk, cried: “Ho! what have we here,
so very round and smooth and sharp? To me tis mighty clear,
this wonder of an elephant, is very like a spear!”

The third approached the animal, and, happening to take,
the squirming trunk within his hands, “I see,” quoth he,
the elephant is very like a snake!”

The fourth reached out his eager hand, and felt about the knee:
“What most this wondrous beast is like, is mighty plain,” quoth he;
“Tis clear enough the elephant is very like a tree.”

The fifth, who chanced to touch the ear, Said; “E’en the blindest man
can tell what this resembles most; Deny the fact who can,
This marvel of an elephant, is very like a fan!”

The sixth no sooner had begun, about the beast to grope,
than, seizing on the swinging tail, that fell within his scope,
“I see,” quothe he, “the elephant is very like a rope!”

And so these men of Indostan, disputed loud and long,
each in his own opinion, exceeding stiff and strong,
Though each was partly in the right, and all were in the wrong!

So, oft in theologic wars, the disputants, I ween,
tread on in utter ignorance, of what each other mean,
and prate about the elephant, not one of them has seen!

John Godfrey Saxe was born in Highgate, Vermont on June 2, 1816. He entered Wesleyan university in 1835, but left in his freshman year. He graduated at Middlebury College in 1839. Over the next four years he studied law in Lockport, New York, and then in St. AI-bans, Vermont , and was admitted to the bar at St Albans in 1843. He was the superintendent of common school from 1847 to 1848 and became the state’s attorney in Chittenden county 1850-51. He purchased the Burlington Sentinel and was the editor until 1856. He served as the attorney-general of Vermont in 1856 and was also the deputy collector of customs. Twice he ran unsuccessfully for governor in 1859 and 1860.